Text below adapted from The patient who has mania in Psychiatry in primary care by Roger S McIntyre,  (CAMH, 2019).

Pharmacological treatment of an acute manic episode includes lithium, divalproex sodium and atypical antipsychotics, alone or in combination (Table 1). Choosing between monotherapy and combination treatment depends on prior medication use and patient factors that may influence progress or safety. For untreated patients with mania, consider monotherapy with a first-line medication such as lithium, divalproex or an atypical antipsychotic. For patients who are insufficiently managed with monotherapy, switching to a separate antimanic monotherapy or combining antimanic treatments is recommended. Table 2 summarizes dosing, monitoring and side-effects for different medications.

Lithium remains a highly effective pharmacological treatment for acute mania. For patients with classic mania, which refers to the presence of euphoria, grandiosity and hyperactivity in a person with a stable episodic course, many experts prefer lithium as a first-line medication.

However, most people seen in clinical practice have more complex presentations that include, but are not limited to, dysphoric/mixed states, comorbidity, psychotic features and rapid cycling (i.e., four or more affective episodes during the previous 12 months). In such complex presentations, lithium may be less efficacious and divalproex and atypical antipsychotics are preferred. (Note that the DSM-5 has eliminated mixed states, which refers to co-occurring mania and depression, and has replaced it with “mania with mixed features specifier.”) 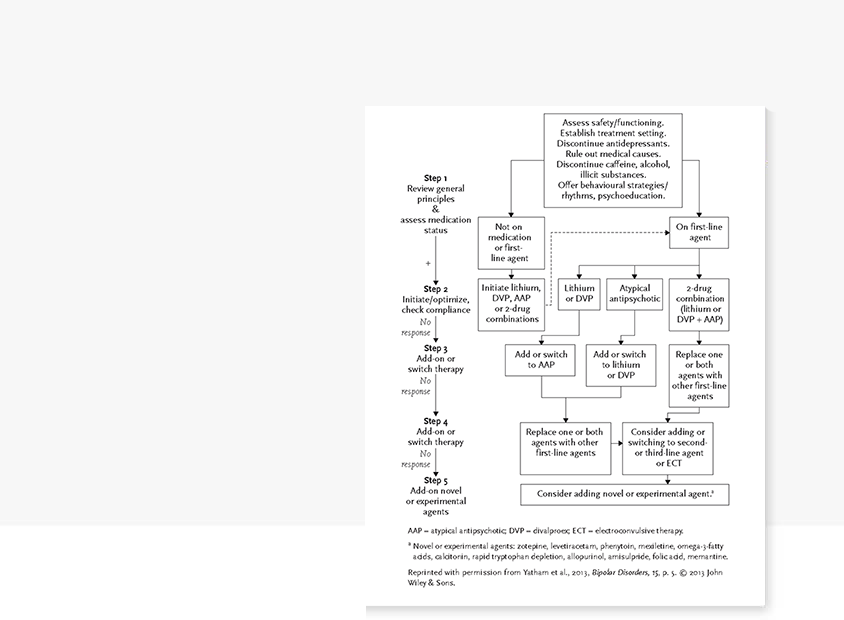 A significant liability of most atypical antipsychotics is that they often cause significant weight gain and associated metabolic disruption. The probability of significant weight gain is even higher when these medications are prescribed with other weight-gain-promoting medications, such as lithium and some antidepressants. When deciding whether to use a weight-gain- promoting atypical antipsychotic, consider the benefits and risks for that particular patient.

Benzodiazepines are frequently prescribed to patients with bipolar disorder. They are highly effective in reducing agitation, irritability and anxiety, and normalizing sleep. Their use as an adjunctive medication is warranted in carefully selected acute cases. Because non-therapeutic use and paradoxical reactions in the form of worsening agitation are a concern, benzodiazepines are recommended only for short-term use and should be carefully monitored.