Text below adapted from The patient who has mania in Psychiatry in primary care by Roger S McIntyre,  (CAMH, 2019).

There is typically a long delay between symptom onset and correct diagnosis and treatment.

The key elements of bipolar depression include:

In a primary care setting, rapid assessment of a possibly manic or hypomanic patient primarily needs to address the safety of the patient and family or caregivers, as well as health care practitioners. The complexity and severity of symptoms in mania often necessitate hospitalization and require rapid and effective symptom control. Agitation, irritability and severe aggression are common elements of mania and are associated with self-harm (Suppes et al., 2017).

Using a screening tool such as the Mood Disorder Questionnaire is an efficient way to probe for bipolar symptoms. This self-administered questionnaire involves 13 items about manic and hypomanic symptoms. Answering “yes” to at least seven questions constitutes a positive screen. It also indicates that at least some of the symptoms are occurring concurrently and are causing moderate functional impairment. Explore a positive screen further to confirm or rule out a bipolar diagnosis (Hirschfeld et al., 2000). 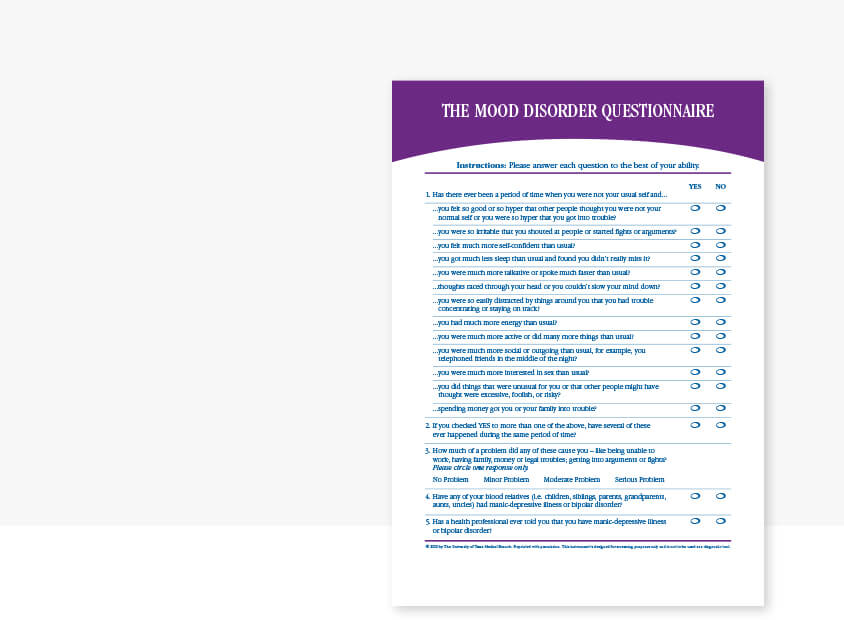 This depression inventory can be self-scored

A rating scale that quantifies the severity of anxiety symptomatology

LEAP looks at how patients are functioning at work

The PHQ can be used for diagnosis, assessing severity and monitoring treatment response

Asking items on a checklist

Asking about substance use