On this page:  Recent KCNI News | In the Media | Research Highlights | Archive

Investigating the mystery of youth psychosis

An inspiring conversation with CAMH’s Aristotle Voineskos, Dionne Sinclair, and Shreejoy Tripathy and led by Valerie Pringle that showed the power of philanthropy and the infinite possibilities of mental health research. 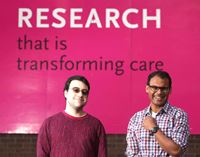 In October 2021, the Toronto Star interviewed KCNI researchers Drs. Shreejoy Trepathy and Michael Wainberg regarding their article in the journal PLOS Medicine entitled, “Accelerometer-derived sleep measures and lifetime psychiatric diagnoses.” This research study was the first to objectively measure sleep patterns on a large scale in people with mental illness compared to the general population.

The Brain Health Nexus will convene leaders in brain health policy, patient advocacy, clinical care models, research and innovation to design and launch a roadmap for collective action to combat the global burden of brain disease.

The Toronto Adolescent & Youth (TAY) CAMH Cohort Study is a 5-year research study supported by the Discovery Fund that will recruit and follow 3,000 youth over 5 years. The purpose of the TAY Cohort study is to better understand who may be at risk of experiencing certain mental health challenges so that we may better understand how to help and support people experiencing these challenges later on.

In this episode of @lifesawreckpodcast, Kyle Moore talks with Dr. Sean Hill about his work and how it's changing the future of mental health care, and to be honest, at times it sounds like something straight out of a sci-fi flick. Kick back, relax, and take some notes because in this podcast, we're talking about everything from artificial intelligence to sleep and even Italian food.

The World Dementia Council (WDC) hosted a dialogue virtually on June 9, 2021, and discussed the perspectives of leading experts on where the state of data sharing is in dementia. Amongst other international leaders, KCNI's Scientific Director, Dr. Sean Hill participated in the open discussion and reflected on the opportunities and challenges of the Global Knowledge Graph for Integrated Brain Health Research data. 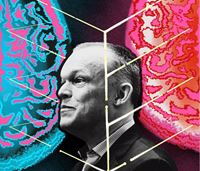 Mapping Mental Illness - What Happens to Our Brains When We Get Depressed?

In the June 2021 issue of The Walrus, Dr. Sean Hill talks with writer Simon Lewsen on mapping mental illness, and the quest to trace the human brain.

Schizophrenia is a severe mental illness characterized by psychotic symptoms, such as hallucinations and delusions. Neuroleptic medication that targets either dopamine or acetylcholine receptors or both neuromodulatory systems is used to treat schizophrenia. However, there are no clinical tests to guide treatment and predict which individual patient will benefit from which type of pharmacological intervention. To overcome this impasse, this project introduces a neurocomputational approach for understanding the emergence of psychosis symptoms focusing on key pathologies of dopaminergic and cholinergic systems using reward and social learning paradigms combined with validated mathematical models of cortical computation.

This project is led by Dr. Andreea Diaconescu.

Repetitive transcranial magnetic stimulation (rTMS) is an emerging alternative to existing treatments for major depressive disorder (MDD). However, its effects are variable, which may be related to individual differences in structural and functional brain connectivity. Previous approaches to finding a target site for rTMS have focused on individual brain regions implicated in MDD, such as the dorsolateral prefrontal cortex (dlPFC) and orbitofrontal cortex (OFC). However, not all patients respond to dlPFC-rTMS, so investigating alternate rTMS targets (like the OFC) is crucial. This study will investigate how rTMS stimulation affects the OFC’s functional and structural connectivity to determine whether and how a network-based targeting approach may be optimized for OFC-rTMS therapies.

This research will be lead by Dr. Shreyas Harita under Dr. John Griffiths' lab.

Cortical processing relies on a fine balance between cell-type specific interactions in microcircuits. In brain disorders such as autism, epilepsy and major depressive disorder (MDD), this balance is altered by reduced somatostatin interneuron mediated inhibition and dendritic atrophy in pyramidal neurons. To investigate the effects of these changes, we are integrating human molecular, cellular, and circuit data to generate detailed models of human layer 2/3 cortical microcircuit in health and MDD and simulate activity during baseline and response. We aim to test the current leading hypothesis of decreased signal to noise ratio in cortical processing in MDD due to an increased baseline activity and reduced response.

This work will be lead by Dr. Kant Yao under Dr. Etay Hay's lab in collaboration with Dr. Etienne Sibille and Dr. Taufik Valiante.

The fabric of the primate neocortex and the origin of mental representations: From transcriptomics to single neurons and neuronal networks ($625,000, 5 years)

A distinctive feature of intelligence is being able to represent objects “in the mind,” without the need to see them directly. The NeuroNex Working Memory (NXWM) initiative will systematically explore the specializations that allows the brain to produce mental representations. The international, multicentre team—including 16 labs at nine institutions in the U.S., Canada and Germany—will scrutinize for new molecules, cell types and patterns of brain activity and behaviour, then use advanced computational techniques to assemble the knowledge in an integrated quantitative model of “mental brain networks.” KCNI will co-develop advanced computational techniques for the initiative.

The Sunrise Challenge presented by Sun Life invites Canadians to wake up with the sun for 5 days (May 30 to June 3) while raising vital funds for CAMH. By rising together and rallying our friends, family, and co-workers behind the cause, we can change the way the world sees and treats mental illness.