If you think of mental illness as mostly an adult concern, the numbers tell a different story: An estimated one in five young people has a mental illness, including substance use problems. Half of all cases of mental illness begin by age 14, and three-quarters by age 24.

The opportunity to prevent mental illness or lessen its impacts over a person’s lifetime makes the early years particularly important for mental health. CAMH researchers are learning from young people to better understand their needs, improving care, and developing biologically informed treatments and prevention strategies to transform outcomes for kids and adolescents.

“The major challenge we see is the increasing prevalence of depression and anxiety among youth,” says Dr. Hayley Hamilton, Senior Scientist in CAMH’s Institute for Mental Health Policy Research, citing a notable rise in the latest CAMH student survey results.

CAMH’s 2017 Ontario Student Drug Use and Health Survey found that 39 per cent of students met criteria for moderate to serious psychological distress, which reflects symptoms of depression or anxiety, up from 24 per cent of students in 2013. “That’s a tremendous increase,” says Dr. Hamilton. 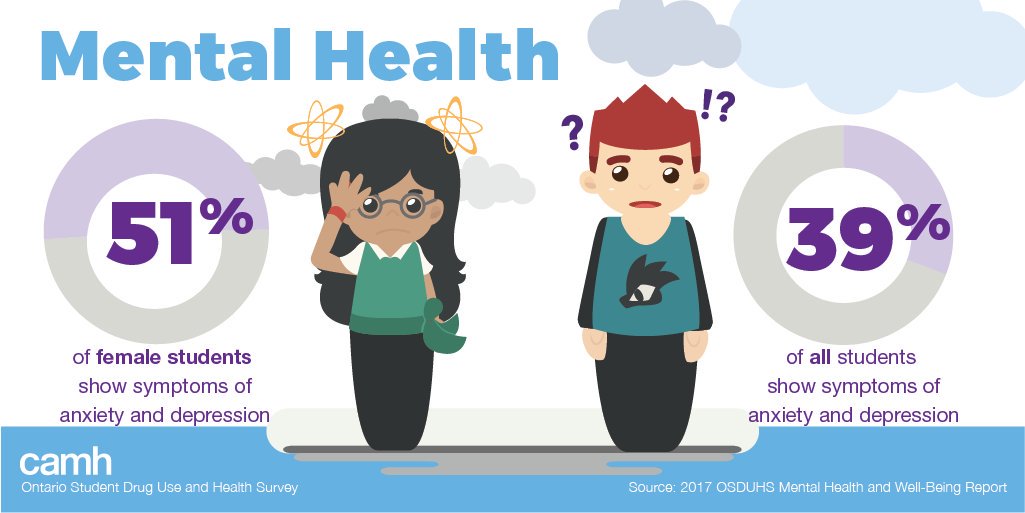 And this increase is hitting girls hardest. For the first time, more than half of female students (51 per cent) showed signs of moderate to serious psychological distress. The rate among males was 27 per cent. “We need to understand what is driving those gender differences to develop prevention and intervention strategies,” says Dr. Hamilton.

To bolster mental health in young people, CAMH researchers are using innovative approaches to identify and treat illnesses earlier. For example, the Depression Early Warning study is using mobile and wearable technology to monitor youth depression, with the goal of optimizing early intervention. CAMH researchers and their partners are also creating and evaluating a mobile app to deliver a better treatment experience for youth with depression or anxiety.

In other positive shifts, “young people are more open to talking about mental health” than just five to 10 years ago, says CAMH’s Emma McCann. She hears directly from many young people in her role as Youth Engagement Facilitator in CAMH’s Margaret and Wallace McCain Centre for Child, Youth & Family Mental Health.

“There's not enough teaching about ‘what now’ – how young people can support themselves and each other,” says McCann. They need more information about seeking mental health care, and what to expect, including privacy concerns, and when parents need to be informed. “I hear that from young people a lot – they don't want to tell someone they're having mental health problems because they don't know what happens next,” she says.

Turning health care on its head

A big push – and one that’s already reaching young people and their families – is making mental health services for young people quick and easy to access, and truly centred on their needs.

“This is a major health care system change. This means working differently and thinking differently,” says Dr. Joanna Henderson, Director of CAMH’s McCain Centre. She’s buoyed that she’s seeing commitments to such change at all levels.

At the heart of this approach is partnering with young people and families in research to better understand their needs, then co-creating and evaluating approaches based on these findings. “In the last five years, we've been engaging with youth, families and service providers to design a new system of services for young people,” says Dr. Henderson.

The first on-the-ground result is three new one-stop-shop mental health clinics in Toronto for young people, opened in 2016 as part of the CAMH-led YouthCan IMPACT study. In spring 2018, the Ontario government announced the provincewide launch of Youth Wellness Hubs Ontario, ramping up to 10 sites offering this new model of care, led by Dr. Henderson.

A new CAMH study, funded by the Canadian Institutes of Health Research, will engage 1,500 young people, family members and service providers throughout Ontario to identify what they perceive as the key components to ensure youth mental health services are effective.

“The transformation in care is happening,” says Dr. Henderson. “It’s at early stages, and there's a long way to go to make sure changes are sustained over time, which is why research and evaluation are so critical.”

Looking for opportunities inside the brain

Another promising research direction, but with longer-term impacts, is understanding the developing brain and creating biologically informed treatments and prevention strategies.

“There’s still so much to know,” says Dr. Stephanie Ameis, Clinician Scientist in the Campbell Family Mental Health Research Institute and the McCain Centre at CAMH. “For example, for people with autism spectrum disorder, there are few treatments for the core symptoms, and no biologically informed treatments at all, so we need to understand the brain to understand these disorders and develop new treatment opportunities.”

“The science has told us we have to conduct our research in different ways to find better targets for treatment or prevention,” says Dr. Ameis.

This includes analyzing large amounts of data to find patterns that may provide clues. For example, instead of studying a single mental illness, CAMH researchers are examining children who share symptoms across multiple illnesses and whether these individuals have similar brain changes. This may indicate new opportunities to develop treatments that target the brain, and may have effects across different mental illnesses.

CAMH researchers are also targeting the brain with promising innovative treatments, such as a new study combining a type of brain stimulation therapy and brain training exercises to improve outcomes for young people with hard-to-treat depression. Dr. Ameis is also investigating brain stimulation as a potential treatment for youth with autism who experience problems with the brain’s executive functioning, which is involved in planning and staying focused on a task.