As a woman born to a white mother and an Indigenous father, renowned senior Cree artist Rebecca Baird has spent her life learning from and appreciating both cultural worlds.

Her introduction to the visual arts world came via the emerging Queen Street West arts scene of the 1980’s and 1990’s, when the arts and music crowd gathered at places like the Cameron Public House, the Cabana Room and the Matador, to name a few of the iconic venues of that cultural heyday.

During that time, she never strayed from her roots, even when she sometimes faced hurtful remarks. “Because I can pass as white, often in conversation, individuals have made truly unkind comments about Native people not realizing my Indigenous heritage,” says Rebecca.

Rebecca’s connection to CAMH began with her late brother-in-law, the famous Cree activist and Urban Elder Vern Harper, who was a staff Elder for several years.

The installation that Rebecca created for the CAMH Therapeutic Art Project, titled All My Relations, is located above and beside the stairs leading from the lobby of the newly opened Crisis & Critical Care Building. Upon entering the reception area fronting Queen Street, visitors will be greeted by an air-brushed mural approximately five metres high and 13 metres wide. (A spider web on the mural is a tribute to Harper, whose ally spirit helper was a spider.) Overhead, 7 satellite-style sculptures are suspended from the ceiling. 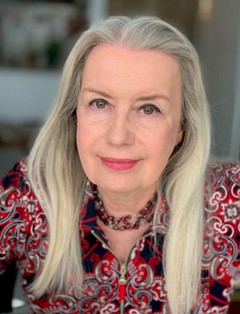 Like Rebecca herself, the piece is a blend of cultural influences.  While it is imbued with Indigenous symbols and imagery, especially the significance of the number seven in Indigenous cultures, it also features a look and feel inspired by Mid-Century Modern design of the 1950’s and 1960’s.

“It is inspired in part by fabric designs I grew up seeing on curtains and wallpaper in the homes of family and friends,” says Rebecca. “Its bright and colourful imagery and satellite shapes symbolically represent how the communication of Indigenous knowledge is passed down from generation to generation.”

Rebecca’s work has been featured in public and private settings throughout Canada. One of her pieces entitled All Magic Is in the Will, is currently on display in the Royal Ontario Museum and another, Stay Here With Us, was installed in the Canadian Museum of Civilization. She was also commissioned to produce a painting called Open Sky that is on display at Lester B. Pearson International Airport. Most recently, the city of Toronto commissioned her to create imagery for the glass façade of the King and Liberty pedestrian bridge.

Like all of the artists who have contributed to the CAMH Therapeutic Art Project and its intent to foster an environment at CAMH conducive to patient recovery, Rebecca was conscious about how she wanted her piece to be perceived by the thousands of patients, staff and visitors who will be seeing her work in the coming weeks, months and years.

“I want All My Relations to be welcoming and inviting. For people to feel calm, like they are part of a bigger universe,” adds Rebecca from her Toronto home. “I thought that if a patient is having a really bad day, it could help. Or if a visitor comes and they are stressed, hurt and upset because someone they love is going through a terrible time, it could help them too. Also for staff, when they come to work, they may feel uplifted by this calming, yet colourful installation. Finally, All My Relations can act as a form of wayfinding. People might be pleased to say ‘meet me at the mural!’